My front door, rather than opening into the hallway, opens directly into the room we call 'the office'. When we first moved in it took a while to decide upon the purpose of this space as it is a bit of a thoroughfare (we rejected both dining room or kitchen). In a previous life music lessons were taught from in here; at that time – about 20 years ago – I lived in another house on the same street – in the summer time the door would always be left open so that you could hear students practising guitar or piano*.

For practical reasons the room does have coat hooks – my justification for the (rather extravagant) Eames purchase was that I bought it on a visit to New York about nine years ago when the exchange rate was very good so it seemed like a bargain! There is quite a lot to see in here so we may be a while... 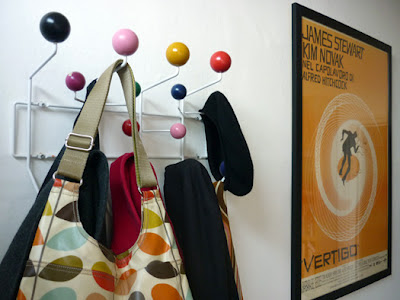 *This may be a good time to share the view from my front door, although I live in the city, this is what I look out onto... 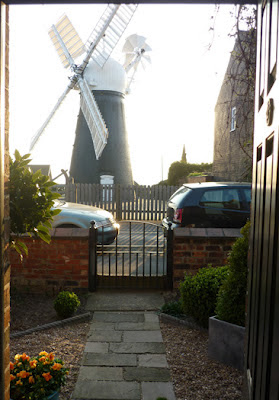 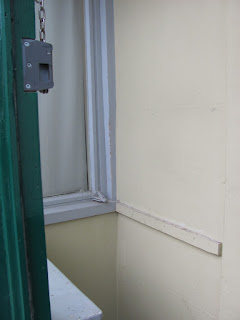 Well, I know it may (definitely!) not look like much at the moment, but this was once quite a special place, as I hope (with my plans) it will be again.

Albert used to have a piece of board placed here,
from the windowsill to the baton (fixed on the wall on the right)and on it was the most magnificent scarlet geranium you had ever seen. Margaret(my next door neighbour, no.20, and Audrey's best friend), tells me that the plant, as it was sheltered, flowered the whole year round. Albert was very proud of it's flowering capacity, and he liked the thought that people would see it through the window from the street ... stop, and look in admiration. 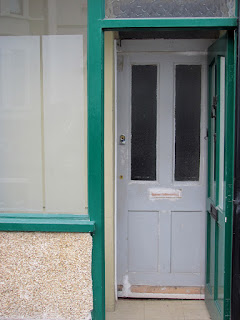 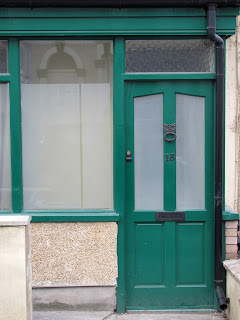 Ok P, I thought it would be nice to show you the whole of the front (porch door) and have it then magically open, to reveal another front door behind it.
You will actually get into the house eventually ... you see, Albert decided that he wanted the 'biggest bay window in the street' so he built a huge square bay on the front of his house, and added another front door too.
You'll get to know of Albert, and his wife Audrey, quite well as the tour develops. They lived here for over forty years before me.

The 'old' front door looks very poorly doesn't it?
It has some nice traditional panes of bubble glass inset into it, but has it's edge panel missing at the bottom. I think It'll look nice when it's restored (the same goes for the rest of the house!).
Posted by Angie Butler: Letterpress Printed Artists' Books at 2:21 pm 4 comments:

And this is me...taken on a particularly sunny March morning. The bay tree has become bent in recent high winds! 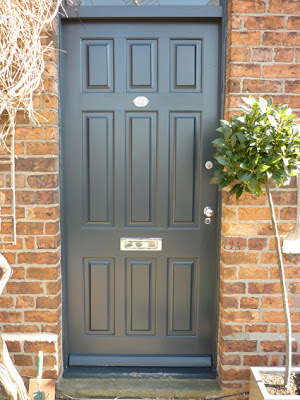 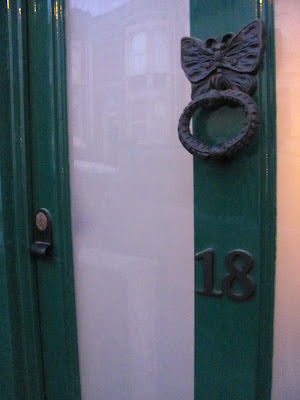 Hello P - this is where I live ... well, my front door anyway.
Want to chat on the doorstep for a bit,
or would you like to come on in?
Posted by Angie Butler: Letterpress Printed Artists' Books at 8:15 pm 5 comments: